We reluctantly fly back across the Atlantic on Sunday night, arriving bright and early Monday morning. Returning to our car, loading all our luggage, we then set off for Exeter where we spend the night, catching up on our sleep.

In the morning my first appointment is at dermatology, where the faint redness can still be seen, as a result of the cellulitis. Thank goodness for the antibiotics that I took with me! No other cause for concern is noted, following a full body check.

Then it’s onto the ward where I see a different trials nurse for blood and obs (my usual nurse is on her summer break). Everything is stable and wonderfully normal. Big sigh of relief!

The final appointment is with a different oncologist from my usual one (also on vacation). Pots of pills handed over, and we’re soon on our way home.

After two long days of travelling, it is so good to fall asleep in my own bed.

The end of Summer, turns into the beginning of Autumn: new season, new hope. 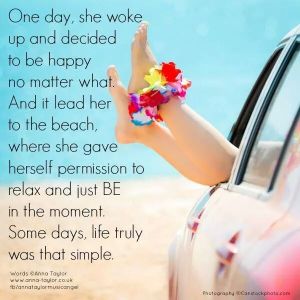 And so our summer journey comes full circle as we return to our starting point. Back in North Myrtle Beach, and the weather is beautiful; swimming in the ocean which is only a few degrees lower than the air temperature; hiring loungers and an umbrella on the beach; making sure we’re covered in high factor sunscreen; wearing hats and drinking lots of water. We visit with friends and are treated to southern hospitality at its best.

This summer break has been different in that we couldn’t visit all the locations we would wish, because of the four-weekly hospital appointments I have. My three days in bed with cellulitis really brought home to me how this disease now affects my life. I will no longer laze all day in the sunshine, now seeking out shade and regularly using sunscreen. But, we did have a wonderful, restful vacation. I will not let cancer beat me; fun is still very much on the agenda! 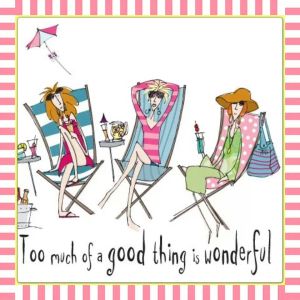 We arrive soon after lunch, unpack a few things, and go and find some shade around the pool. Blue skies, warm seas; perfect. The pelicans are flying overhead, in formation, and a guitarist is playing happy, sunny, beachy music at the tiki bar.

We are here for two nights, and can really relax. No rushing around theme parks or visiting crowded shopping malls. HHI is an amazing place to just re-charge batteries and feel no stress at all. My leg likes this place! Lots of reclining on beach chairs and taking it easy. Even though there is a weather alert, a heat advisory, for temperatures of 98℉, we love the sunrises, sunsets and long lazy, blue-sky days, filled with warmth. The redness at the top of my thigh, from the cellulitis, is still there, and I’m continuing to take the antibiotics. But, the balmy weather and island lifestyle are most welcome.

I awake feeling so much better, and we decide to drive South West to Tampa, and Busch Gardens. I again hire a motorised mobility scooter, and begin our journey around the park. By the time we reach SheiKra the sky is darkening, lightning threatens, and the rides are closed ~ so, so disappointing! We spend quite a while moving around the park, looking at the various animals, but in the end we call it a day, give up, and begin the drive back to Orlando. I think last year, almost the same thing happened, it absolutely poured with rain as we arrived in Tampa, we didn’t even make it into the theme park, turned around and left! Never mind, the new ride Falcon’s Fury has yet to open ~ there’s always next year!

The weather improves upon our return to Orlando, and we go to look at some American classic cars and hot rods.

Our last day in Orlando is spent shopping and packing. We drive up to the Mall at Millennia and browse the shops in cool air-conditioned comfort. Again there is another spectacular afternoon thunderstorm to end the day and clear the air.

We pack and load up the car that evening, ready for a quick getaway tomorrow morning. It has been a different sort of holiday in Orlando this year, what with the thunderstorms and my cellulitis. Lots of activities having to be curtailed. Still, I think we made the most of it, visiting all the theme parks that we had planned upon, just not as frequently as we would have liked!

Today is hot, scorching actually, and we decide to get up early and drive South West to LegoLand. As the park had just opened, the queues were not too bad when we arrived. We made our way through the miniature cities and displays, and on to the water park; locating a huge parasol we parked our belongings and found the wave pool. It was gentle fun, a few hours spent idly reclining on the chairs, or building a Lego raft and drifting around the lazy river. As we leave, son decides he wants to go on one final ride, a rollercoaster, and husband and I wait in the shade. This is where I begin to feel really hot and uncomfortable, and eventually husband has to pour iced water down the back of my neck to cool me down. We arrive back at the car and the dashboard display shows 104℉, no wonder I’m overheating. I think I had a ‘heat episode’.

On Saturday we didn’t go to a theme park, deciding to have a much quieter day, and went shopping instead. Again I started to feel funny, fluctuating between feeling hot, shivering, and nauseous. We had to cut our trip short, drove back to the villa, and I went to bed. That evening I had noticed the top of my leg, underneath the support stocking, had begun to look a bit red and blotchy, but put it down to the excessive heat.

On Sunday we went to Universal Studios, hiring a motorised wheelchair with a sunshade on top. This was an absolute godsend as I was able to rest my leg. I could now move through the theme parks with much ease! We also loaded up the front basket with our bags and a cooler full of iced water. Another benefit was that on some rides I could jump the queue! It was a long day, just over six hours, but great fun was had by all

When we got home later that afternoon, the redness on my leg had become more intense and hot. I suspected cellulitis, so that night I began the two-week course of strong antibiotics that I had prescribed from my GP before leaving home, (thank goodness I had them with me). I also took pictures of my leg, and emailed my trials nurse.

Using my American cell phone I spoke with my trials nurse on Monday morning, and she had already spoken to my oncologist, who agreed that yes, it probably was cellulitis, take the antibiotics, and if the redness spreads, to seek medical help!!!

Overnight the redness had not spread. It’s just really bright, hot and sore, looking quite frightening and scary.

I spend Monday, Tuesday and Wednesday in bed, eating very little, but drinking copious amounts of water. I feel tired, but the sickness feeling and headaches, and the fever have gone.

I thought all was going to be ok.

I thought I was invincible.

How stupid am I?

Apparently having lymphoedema makes you more susceptible to getting cellulitis. But this is usually through a scratch or insect bite.

On Thursday it is our thirty second wedding anniversary, and I finally feel well enough to get up, get dressed, clean my teeth, have a shower, and try and look and feel almost normal again. Husband drives to Cocoa Beach, and we have a wonderful celebratory lunch overlooking the ocean.

We leave South Carolina and begin the long drive down the state, through Georgia, and on into Florida. The temperature rises markedly, the skies are no longer grey, and no more rain! We make an overnight stop at Jacksonville, then on to Orlando the following morning. Theme parks, theme parks, theme parks!

On our first full day in Orlando we visit Aquatica, a fabulous water park, where I can relax under a huge parasol, spreading much-needed shade. The river rapids, lazy river and wave pool are visited throughout the morning, each time returning to the shade to reapply sunscreen. Husband and son are much more adventurous, and try out the more thrilling, tube rides!

The next day we are off, bright and early to Sea World ~ always better to beat the crowds! But even at 8:45am, families are streaming through the entrance! It is a blistering hot day, but there is lots of much-needed shade throughout the park. We manage to find good seats for the Shamu show, and spend 45 minutes enthralled by the killer whales and their marvellous trainers. Antarctica too, is a great experience, and a chance to really cool off!

On Friday we drive South West along I4 to LegoLand, a theme park which opened last year. We walk quickly through the miniature cities, and make our way to the water park. It is unbelievably hot! A welcome dip in the lazy river is most enjoyable. Whilst leaving the park I become increasingly affected by the heat, and my husband has to pour ice-cold water down my neck to try to bring my temperature down. When we return to the car, the indicator on the dashboard shows 104℉. Whoa. I have never really been troubled by hot weather, in fact I have loved it. Perhaps it is the drugs I am taking, perhaps the cancer has changed my body somewhat, perhaps I am getting old!

On Saturday we have a break from theme parks and spend time shopping. However, again I am affected by the heat, and have to return to the villa earlier than expected. Wuss!

Sunday sees us at Universal Studios and Islands of Adventure. Again it is hot, and my left leg is beginning to trouble me. So, husband suggests I hire a motorised wheelchair, complete with sunshade ~ it is an absolute godsend. I can move around the parks without getting all hot and bothered, our bags and cooler can go in the front basket, and for some rides, I can jump the queue! Result 😃  We visit the new Harry Potter ride, and are left feeling rather disappointed. It would take three hours to experience Diagon Alley, the lead-up queue to the ride: Escape from Gringotts. We decided to forgo this, joined the single-riders line, and only had to wait forty minutes. The ride itself is a 3D simulator, does not last long enough, and is not frightening at all! A bit of a let down. We then find Platform 9 3/4, and join the Hogwarts Express to be swiftly taken on a journey across the countryside. Despite Harry Potter, the other thrilling rides never fail to excite, and a great day out was had by all.