I just really, really miss you
Seems to be nothing I can do
To stop feeling so blue.

And then I have to stop myself
I look at your photo on the shelf
I love you more than life itself.

Remembering the fun we had
I must stop feeling so sad
Your spirit can make me glad.

“Watch out!” says the photo
Taken almost ten years ago
Your legs swinging to and fro.

Missing you, my Angel son
My dearest, my loved one
You’ll be forever young.

“Your smile makes me smile.”

When I look at your smile
I stop for a little while.
I pause to remember
The memories so tender.

All the fun and laughter
Experiences sought after.
Finding unique adventures
Giving many pleasures.

To see a great big grin
Much happiness within.
Meeting Homer Simpson
Was that day’s ambition.

Missing you like crazy.
Thinking of you daily.
Safe within my heart
We’ll never be apart.

Keep on smiling, Angel
As long as you are able.
I’ll smile along with you
Our love forever true. 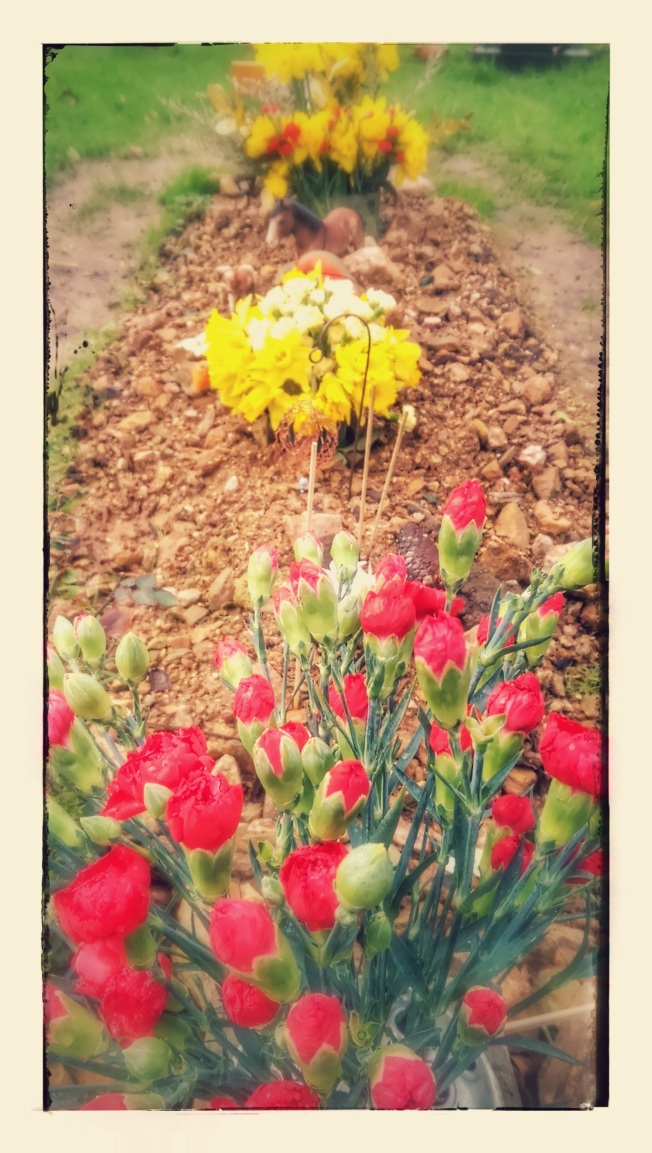 (A lovely quote I found today.)

Having put it off for too long now, we had an appointment today with a stonemason to choose a headstone for you.

What an emotional two hours it was.
But what charming, gracious gentleman we had looking after us.

We had to get it right.
To agree upon all the words for you.
The colour of the granite. The shape.

Well, it’s going to take at least twelve weeks, as the granite is sourced from India.

But it will be a fitting memorial for you.

On the way home, Eric Clapton came on the car radio……..

I love you sweetheart.
Missing you every day.
Beloved Angel son.
xxxxxxxx

Sailing around islands
With a carefree spirit
Sun on the horizon
The sky’s the limit.

Love you forevermore.
Missing you every day.
xxxxx

On the beach at the Blue Water's Inn, (Frank's glass bottom boat in the background)

On the top of the hill, overlooking Batteaux Bay. You, your brother and Dad.

That you’re not here
Is made very clear
I’m filled with fear
My nightmare’s near.

I catch your hand
But where I stand
Our life ain’t grand
Not as we planned.

Love you so much
Just miss your touch
And as such
My heart I clutch.

Broken in two
What can I do?
Won’t mend with glue
I just need you.

Your name I call
My tears do fall
And that is all
Memories to recall.

Miss you like crazy
Dearest Angel baby
As you fly free
Do you think of me?

Love
you
for
ever. 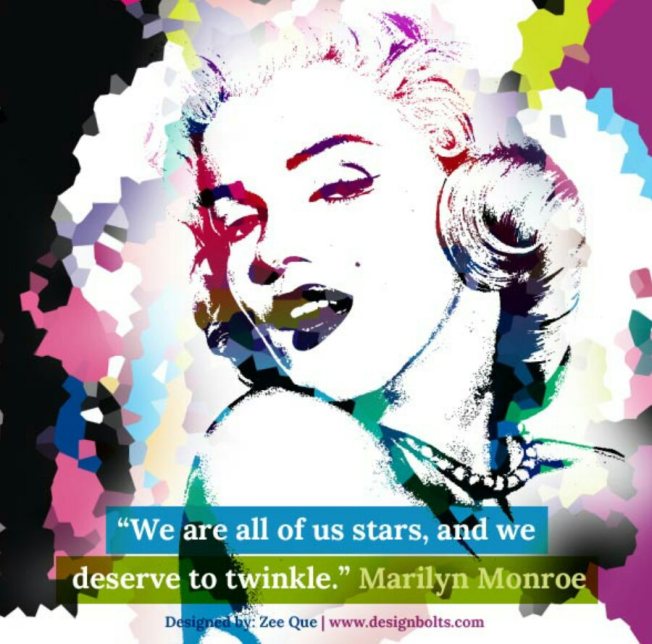 “We are all of us stars, and we deserve to twinkle.”

When you were sixteen and had finished school, you went to an amazing place in the New Forest, called the Fortune Centre of Riding Therapy. You spent three marvellous years gaining a qualification: Further Education through Horsemanship.
Here you progressed with your riding skills, improved your literacy and numeracy, worked on your social skills, leading towards an independent and fulfilling life.

Every summer there was a presentation day, where the students would put on riding exhibitions, show parents around the stables and the many facilities, rounded off with prize-giving.

You, in the indoor arena

Riding in the indoor arena

Every year you received an award.
Here you are being presented with the Wheeler Cup for Kindness.
You always wanted to help others, making sure that everything was all right with them.

Receiving the Wheeler Cup for Kindness

In other years you also received a cup for Humour, and one for Teamwork.
It really was quite prestigious for you, although sometimes you ran away and hid during the presentation ceremonies, as you didn’t like being the centre of attention, or going up to shake hands with a dignitary and accept your award. 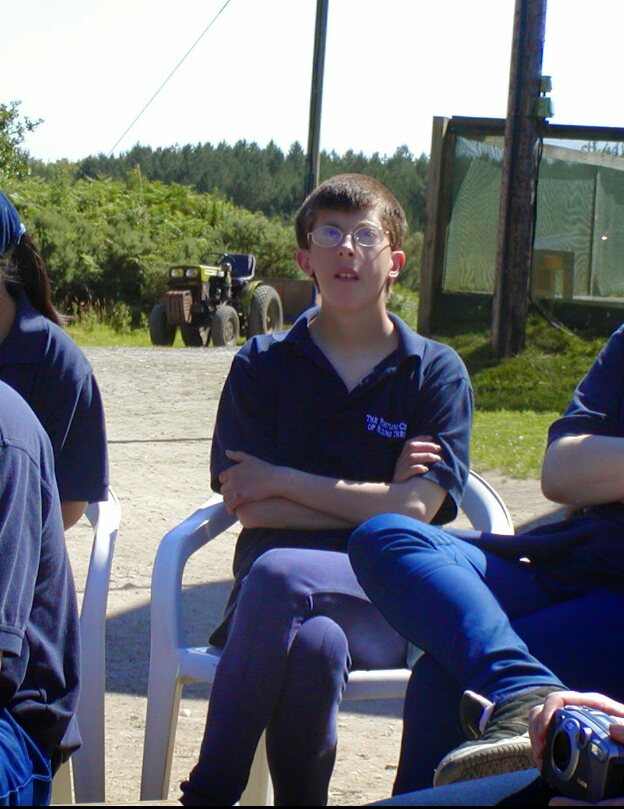 Waiting patiently during the ceremony

An award for Humour, and a silly face

What a wonderful opportunity you had here, you really flourished among such a caring group of educators, and relished your life with the horses. 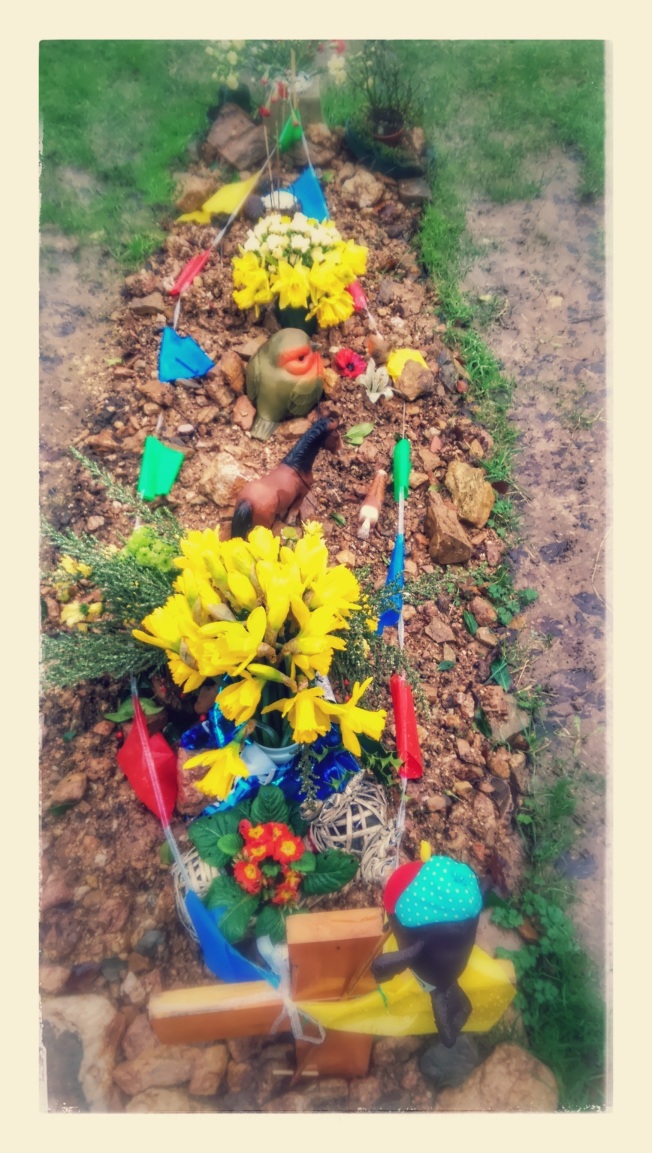 “Don’t tell me how
educated you are,
tell me how much you
have traveled.”

As a family we have been so very fortunate to be able to travel to many destinations around the world.
Your first flight in an aeroplane was to Hong Kong (in 1990), where we stayed for just over a week, en route to Australia, where we were to live for two years. You were five, and your brother was three years old.

During our time in Australia, we flew to Canberra, Sydney, Brisbane and Townsville on different holidays.
We were lucky enough to be able to make use of military transport aircraft: Melbourne to Sydney in a Hercules C130, sitting in very basic webbing seats, was certainly an experience.

On our way back home to England, we had a week’s stop off in fabulous Singapore. (1992).

The next holiday was to the island of Paxos, just south of Corfu. (1993)

Then began our many years of summer holidays with my father, on his yacht.
Sailing around Bermuda, Tobago, British Virgin Islands, then up and down the east coast of America, from South Carolina to Key West in Florida.

We certainly do love to travel, and have been blessed with very many opportunities.

The amazing experiences that you encountered really added to your global education.
From swimming on the Barrier Reef, to walking through rainforests, from eating authentic Chinese food in street markets, to watching a snake charmer, from watching NASCAR races to drag boats, from swimming with dolphins to taking a cable car to the top of the Schilthorn to eat in the revolving restaurant.

We have had so many adventures, been so privileged to be able to take our boys to so many different places.
Adapting to new languages, cultures, food, scenery, animals, schooling, friends, climate, currency, almost became second nature, and you took it easily in your stride.

I’m glad we were able to take you with us to so many diverse destinations.

A day trip to Land's End, Cornwall, signposting to our previous home in Victoria, Australia

I might be smiling
But I’ll never forget you.
You may catch me laughing
But you’re there, in my heart.
I’m making plans
But I’m taking you with me.
I’ll keep on keeping on
In your honour, in your memory.

Two emotions occurring together:
Hopefulness and heartache.
Delight and despondency.
Happiness and sadness.
Pleasure and pain.
Joy and sorrow.

I think of you, and I smile,
Then, all at once, I’m sobbing.
I recall an event, and chuckle,
Moments later, anguish.

A public mask, a private melancholy.

The new normal of coping without you.

I love you baby.
Missing you like crazy.
Beloved son.
Forever young.

“Shoot for the moon
Even if you miss
You’ll land among
The stars.”

I came across a photograph of you with Kelly Holmes, when you were about ten years old, taken at your junior school.
She is now Dame Kelly Holmes, and a double Olympic gold medallist.

I don’t think you really knew who she was then; an athlete who was touring schools to promote sport and a healthy lifestyle.
But I remember you were fascinated by this twenty-five year old lady who ran for a living.
Most often, strangers made you feel uncomfortable: you would hide, or go and find something else to do, like engrossing yourself in a book.
With Kelly Holmes, you asked all sorts of questions, not your usual shy self, at all.

You and Kelly Holmes

Kelly Holmes signed a photograph for you

Love and miss you so very much.
Are you running around having fun, my Angel?
Blowing kisses to you in heaven.
xxxxx 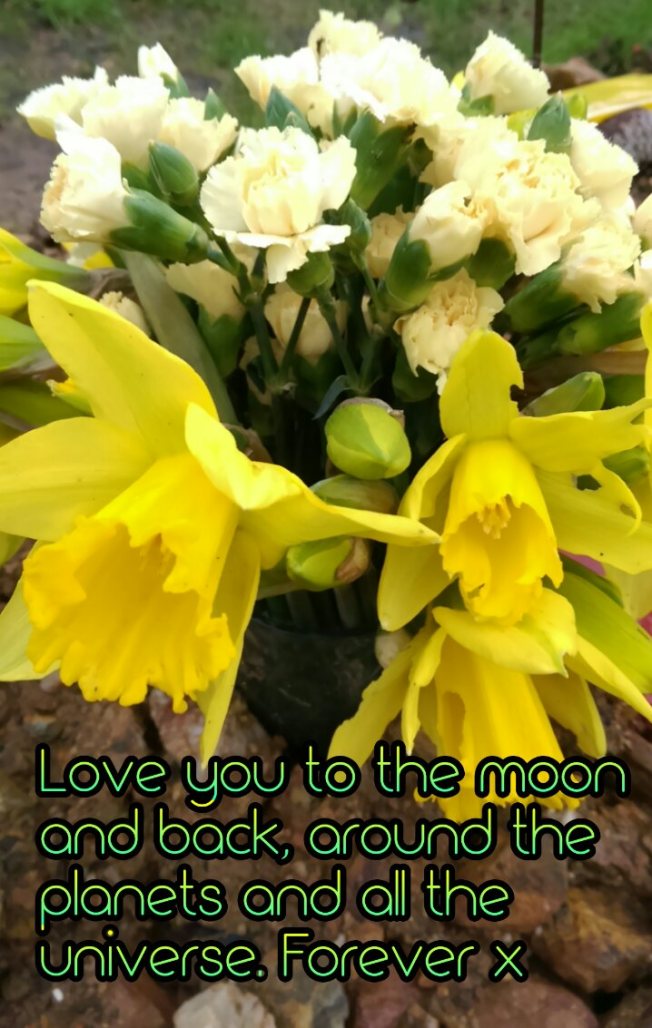 I walk down that memory lane
Because I love bumping into you.
Sitting, overlooking the harbour
Taking in the wonderful view.

Up and down the road in front
Watching all the passers-by,
You’d only speak when spoken to
Such a charming and polite guy.

Happy in your own little world
I imagine you walking along,
Hands in pockets, coat done up
Surely this is where you belong.

I close my eyes and think of you
Picturing us strolling together,
Talking about this and that
In the beautiful sunny weather.

So, here I am down memory lane
Bumping into you along the way.
I smile, thinking of the memories
But my heart breaks, day by day.

The harbour this afternoon 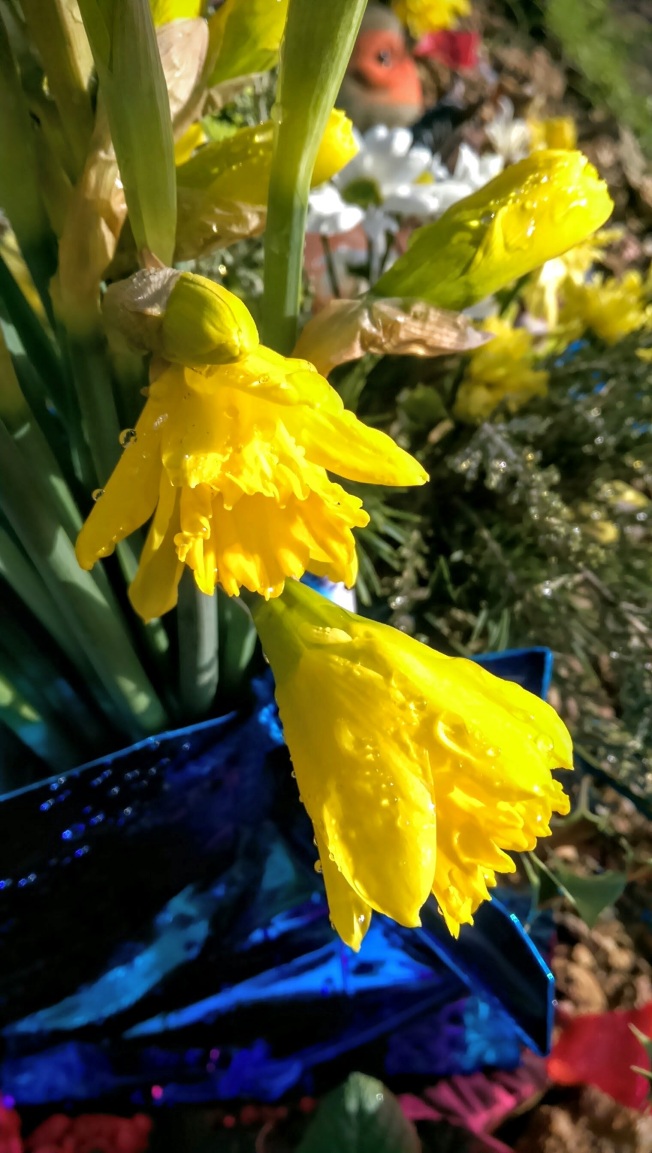 A sunny corner of the harbour 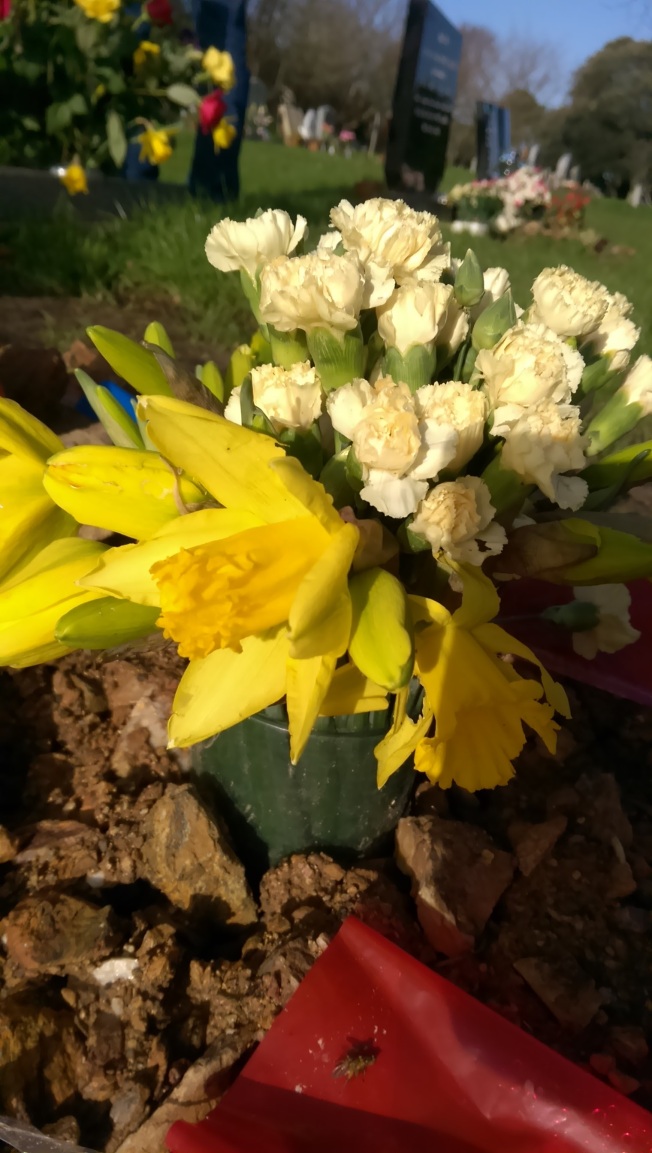